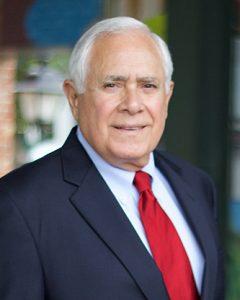 Theodore M. “Ted” Haik, Jr. is a Blue Key Honor Society graduate of the University of Louisiana at Lafayette and President of the Student Body Association. He earned a Juris Doctorate from Loyola University Law School in New Orleans.

Elected to the Louisiana Legislature in 1975, he spent 20 years representing Acadiana in the House of Representatives. He served as Chairman of the Insurance Committee, Capital Outlay Committee, “Child Net” Handicapped Services Committee, and Subcommittee on Environment. He served as a member of the Civil Law and Procedure Committee, Judicial Reappointment Task Force, State Bond Commission and Judiciary Committee.

Upon retirement from the Legislature, Ted was appointed as the first Chairman of the Louisiana Property and Casualty Commission, a commission comprised of legislators, the Department of Insurance and various consumer groups and served as chairman from 1996 to 2014. Presently, he serves as a member of the Louisiana State Mineral and Energy Board.

Always active in civil and professional organizations, Ted has served as President of the Iberia Parish Bar Association and received eight legislative awards for outstanding service during his public service. He has also served as a member of the Sacred Heart Catholic Church Pastoral Council and Chairman of its capital building program. He was city attorney for the City of New Iberia for 8 years and during his tenure was elected as President of the Louisiana City Attorney Association.

Ted is a former Captain in the Louisiana Army National Guard and a graduate of the University of Virginia Military Law School. He is married to the former Carol Redmond, they had four children, two of which practice law with him in his law firm.

60% of Practice Devoted to Litigation